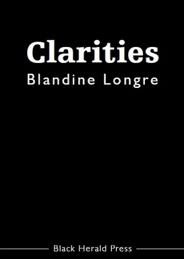 An epigraph from Sylvia Plath (Love Letter) stands at the gate of Blandine Longre's aptly named collection of poems, Clarities: 'I knew you at once./ Tree and stone glittered, without shadows'. This defamiliarised moment of clarity, this love epiphany, is suspended like a beacon over Longre's remarkable writing of diverse epiphanic experience. These poems are coming out of the chasm of experiential, momentous exchange - with clarity. But that clarity is not composed of sweetness and light: it's a carnival of grotesques and conflicting impulses, of puissant exchanges and mutilating forays and retreats. We are in the realm of emotional experience. It's a vulnerable world of affirmation, deformation, offering and denial; we all know it: it's what makes us tick.

Blandine Longre has found a language for the push/pull, the gut-wrenching/the ecstatic, the vulnerable/the guarded: the matter of our emotional, energetic composition. Her writing is fueled by a passion and an honesty, that unholy, oxymoronic coupling out of which we attempt to mediate our lives, but normally fail. Longre explores the complex variety and intensity of the 'clarity' experience, not as it exists as a rare, even fetishised, potential event, but as it has frequent bearing on all our significant perceptions. It's a dynamic component of our lives, our deals with ourselves, our mirroring exchanges and our important relationships. It constitutes our sanity and our potential for happiness - and it isn't always pretty. Longre has invited us in to the theatre of terrible reckoning, before Superego intervention closes the gate and the matter is banished to the realm of the repressed.

How to read the other and the self in the eye of the other, John Donne's ecstatic business, is a theme ('the whole discordant symphony of selfhood' [I-soul]. The intimate relationship is the most critical in this respect. Here's the first poem in full:

When the time comes

Put a distant face to your proffered name

Then in the vacant soul's retina,

look at your lone visage and foretell what

your feud of a body could not

(from where its words knelt uprightly so)

Through slaughtered days and strangled dawns

(Jolting nights in between)

no word nor rock for it

Blandine Longre has tipped her hat to Donne by way of other epigraphs within this collection. There are buried allusions as well: 'sur-faces now undone as coarsely as they were/ half-donned' (Exhumation). Donne bestowed his own epigraph upon a history of love poetry with his 'John Donne, Anne Donne, undone'.

In When the time comes, Longre steps sure-footedly into the metaphysical tradition. The poem is in the form of a sonnet and contains a conceit. The imperatives, 'put', 'look', throw out the challenge to the bracketed 'you', by way of aside: 'you choose' with its hooting owl vowels. 'Lone visage' (echoing 'distant face') and a similarly echoing ('flesh-struck, curse-furrowed, demented') and characteristically concise image, 'feud of a body', are opposed. 'Its words knelt uprightly so': oh, the pious posturing of expressive intention! 'No word nor rock for it': defying concrete manifestation. As a paradigmatic literary affirmation of self, Joyce's Molly Bloom's 'yes' lingers on. Longre's 'earthy screech of she-raptures' [Expurgation] or 'my yesohyes plea' [Up and down and the reverse] correspond. Here however, the poet identifies the duplicity of 'the fleck of your yes-eye against a no-mouth backdrop' like a Rorschach mask. It's the matter of emotional ambivalence: ('mistaking a noyes for a yesno' [Up and down and the reverse])

When the time comes launches by way of the power of the imperative, heads towards the diminuendo of the past participle in perfect pairings ('slaughtered days', 'strangled dawns'), and shuts down with a bold final framing by way of remarkable condensation: 'mere distorted painlines'. 'Mere' returns 'lone'; 'distorted' returns 'feud of a body'; 'painlines' returns 'curse-furrowed'. The syllogism is complete. As an accolade to Donne, it is pitch-perfect; as a contemporary adaptation of the sonnet form, it has both phenomenal integrity and technical brilliance.

A subsequent poem takes up another theme: the provisional uncertainty or conditionality of the modal auxiliary. Avoiding the blackest eye of might addresses the power of deferred response full on. (Later poems speaks of 'shredded oughts-to-be' (Fatum) or 'the perhaps of a mutability' (Épouvante)). Though this 'might' was never more ambiguous, its more obvious rendering being 'strength' or 'power':

-- its overfed despotism a maddening guile

I am a field a realm a route

an expanse of everdark crops

It works either way. The 'despotism' of the conditional? The 'maddening guile' of the provisional 'might'? The might of 'might'? Certain kinds of imagery set up camp in the realm of the ambiguous. It's obvious to state that there's a resolute irreducibility about the best poetic imagery, which is why it has been written thus in the first place. One can only sit in awe of the effect. Eliot spoke of 'the image of absolute necessity' in his essays on metaphysical poetry. Pound described an image as 'that which presents an intellectual and emotional complex in an instant of time'. HD's early Imagiste poems come to mind: they are elusive in terms of explication and are already impervious to reduction. Some of Laura Riding's experiments are also evoked for me, as in use of the present participle here:

their wet down (never was a river redder)

begging for parched soil and dryscape

(the perhaps of a mutability)

The uniqueness that is Blandine Longre's in this collection of poems is twofold, in my opinion. Firstly, she has identified a domain: the all-powerful operation of the instincts and vicissitudes, their processes, their drives and their vital interactions. Secondly, she has found a language and a form: a vehicle for their expression. It involves neologism, courageous experiment and a fierce intelligence to maintain such sustained control over the material. There is an immanence of the object in her writing which is entirely compelling.

Blandine Longre invites us to share an intensity of seeing, comprehending, reading the other and beyond: responding to the judgment call and interpreting the momentous subtlety of the moment. She has constituted an art of the matter of seeing: seeing in a most intimate and shockingly dynamic way. The irreducible integrity of the image that Pound once envisaged is herein extant. Clarities is an astonishing debut. Blandine Longre has unleashed a new, vital, metaphysical animal upon an unsuspecting public. Be warned!


Purchase your copy here: http://blackheraldpress.wordpress.com/
Posted by NJP at 13:09