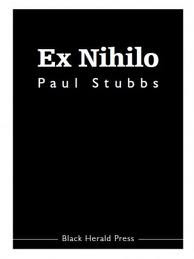 I am in receipt of two volumes of poetry from the newly formed Black Herald Press. Blandine Longre and Paul Stubbs have taken the bold step into publishing and have begun by publishing their own recent work. I am yet to read Blandine Longre's Clarities, though I have dipped in and caught something of the flavour and it looks very exciting. (Review to follow)
[Both books are available for purchase here: http://blackheraldpress.wordpress.com/]

I have had a copy of Pauls Stubbs's second published volume, The Icon Maker (Todmorden: Arc Publications, 2008), kicking around for a couple of years now. Occasionally I mislay it and I am troubled until I find it again. I read it at odd hours and have always found it strangely consoling, though 'consoling' is an adjective quite at odds with its visceral content. Stubbs addresses the condition of a world in which God is dead or departed and the religious impulse is atrophied. Flesh and bone remain, of course, in abundance. A review citation from Alice Oswald on the jacket states: 'Stubbs is one of very few living poets whose work I go back to'. I can only concur; partly because of the difficulty of consuming a whole poem in one or two or three bites - there's always more - and partly because of its stark, discomforting originality, so jarringly at odds with a contemporary idiom. As a 'culture consumer', I have got used to bite-sized poetry; there is, after all, so much to read, to listen to, to see. And this is one of the ways in which I think we are all prone to behave; we don't commonly make the effort. But Stubbs has already discerned the 'now logocentric impulse to remove Calvary from [the] mind' (Without Philosophy) and this very impulse is implicitly the foil for the kind of writing he is doing.

Then there's the idiom. 'Calvary'? There are swathes of biblical reference in his writing. It's not fashionable to resurrect the idea of God, particularly a Christian God, or, further, to address a forgotten metaphysical landscape of apparently redundant images - and icons. But again, this is precisely the point; our atrophied sensibility can barely recognise the significance of that landscape:

After the crucifixion I found
that there was very little new
work, so, forced to wait for
the body of the next God to die,
I did this: I went back into my studio,
to create masks [...] (The Icon Maker)

There's also a wry, comic edge. On first reading, one is not alert to this possibility, apart from remarking the occasional parenthetic interventions, but there's an ironic undertone at work here. The juxtaposition of the signifier, 'Calvary', with the matter-of-factness of 'there was very little new/ work' is characteristically bathetic. Then there's the list-making curiosity of: 'I did this: I went back into my studio', which says so much more than the pared down 'I went back into my studio'. This kind of repetition at first appears redundant and runs against the grain of the poetic rule of a Pound or a Frost, 'use no superfluous word'. But Stubbs has created a distinctive idiom. His repeated pronouns, his 'I's and 'it's, at first seem like poetic tics or something approaching the French use of 'c'est'. It is this latter reinforcement which has the force of edict, and I think this is closer to the disturbingly courageous voice which is Stubbs in flight. He is uncompromising and the disparity of idea and matter are characteristically yoked together as in the Donnean, Metaphysical tradition. As a lone, prophetic voice in the wilderness, Stubbs evokes the historical significance of other such voices and testaments and they become of a piece with the kind of writing he is doing.

The new, long poem, Ex Nihilo, is a tour-de-force. Building on the ground of The Icon Maker, here a world of new beginning and becoming is imagined and its logics and incidentals pursued. It's a poem about the act of creation, and the poet's rib is the Adamic starting point for a prolonged meditation on the genesis of art, creativity and poetic consciousness. The 'I' which begins the poem is an 'I' which disintegrates, fragments, as the body becomes a discorporate symbol within a Picassoesque landscape of bone-rib outcrops and Svankmajeran intrinsically motivated, corporeal assemblages. Some of the phraseology is sublime. Here we have a temporary return of 'I':

as I, I milk back my ink
from the first etymological gland
of language,
while checking out each new sensory terminus
for the arrival of what makeshift or barbaric form?

This 'I', (this not 'I'), neatly encapsulates a tradition of dancing with poetic subjectivity, but has the matter of finding a true language been better expressed? 'Milk back my ink/ from the first etymological gland/ of language' is so alliteratively concise. Then there is the matter of form.

[...] Something double-breathed
and superhuman, but not yet me, no, only this,
this breaking free of a fault, of some
yet to-be-encountered sin;
(imagine a terrible but mistaken inhabitant
of your own soul)

This is a radical extension of dédoublement: eery and intensely unsettling. An unwelcome and fearful imagining born out of the naked shudder of the rawness of the new-born soul breaks in and is not readily discarded. The liminal consciousness of the poetic 'I' suspended in its bracketed container has both the force and the near comic innocence of a child conjuring a bogeyman. The potential for 'fault' or 'sin' always lurks, but there is a nascent purity which shimmers with all the intensity of a Blakeian, Manichean vision.

The Derridean/Lacanian/Barthesian philosophical axis, which reconstituted the language/meaning problematic, launched us all into an era of 'playfulness' and has, in some measure, informed quite distinct modes of production. On the one hand it has, partially, relegitimised the ludic world of the performative lyric, a mode already established in the mid twentieth century partly in reaction to T.S. Eliot's dominance (though his homeopathic trace remains); Simon Armitage would be a prime example of this tendency. On another, there is the radically experimental world of such as Scott Thurston and Tom Raworth, in which language is 'liberated' from syntactic chains and relaunched in a paradigmatic dimension. The latter school has some bearing on any explication of Stubbs's linguistic effects, in that his acts of dislocation mess with the syntagmatic apparatus and deliver new layers of meaning, and that meaning may be unbidden, novel, unsettling and affective.

Paul Stubbs's Ex Nihilo is the antidote to a poetry publishing current which appears to admit the most trivial of efforts. Poetry is a broad church and there's no intrinsic harm in accessibility. However, Stubbs is coming from an entirely different place. He's not writing for the reader who is looking for the habitual 'performative' element, though performance there is in every scalpel's incision. The poet as surgeon diving deep for the soul, excavates the flesh, avoids his own anaesthesia and confronts that primeval landscape in an acupunctural ecstasy with only the agony of an already conscient subjectivity echoing the necessity of intervention.

This review reflects an initial immersion in Stubbs's complex poem. I will inevitably return to this book and it will doubtless haunt me as did The Icon Maker. Ex Nihilo is a poem replete with original ideas, perspectives and perceptions. It eschews the 'duplicitous form, its goodbye' in an act of creative becoming. Herein, Paul Stubbs combines the power of the makar with the vision of the savant and manages nothing less than invoking a truly original word event.

Once again, here's a link to Black Herald where you can purchase: