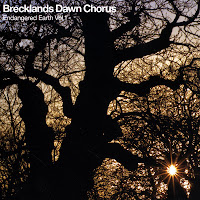 Once, back in the late 70s after a night of insomniac inspiration, I became aware of early bird sounds outside. I had recently acquired a small stereo cassette recording device and decided to record the event. What surprised me then is how startling, varied and loud this daily event can become as it builds to a crescendo. We're not in some safe world of pathetic fallacy here; this is a more purely contingent aural event.

Recently, I was handed a copy of a CD by Andrew Flintham, who is a regular visitor to my book stall. He explained that it is a recording of a dawn chorus made in 1993 at Thompson in Breckland, South Norfolk. It was duly filed in my theoretical 'later' in tray and was kicking around for a few weeks before I finally got round to playing it during a holiday break in Salthouse on the coast. Salthouse itself has become a centre for bird watchers or twitchers, as they're known: those green-clad men and women who dutifully trudge the marshes with their camouflaged and notably phallic telescopes and tripods on a mission to see rare breeds or more common varieties doing their thing. It's an industry on the North Norfolk coast, which is unusually densely populated by all kinds of visiting varieties and the like. Indeed, the RSPB have a bird reserve up at Titchwell, a Visitor Centre at Cley, and there are purpose-built hides dotted around everywhere. But Andrew's recording is not about seeing; it's about listening, listening to the sonic variety, the randomness and cacophony of this daily symphony which mostly goes on unnoticed. I am then not a little reminded of that time back in the 70s and I have to admit to myself that I've only heard the full dawn chorus a handful of times since.

Here's a rare thing then: a 70-minute recording of a dawn chorus, unpolluted by traffic or aircraft noise and practically impossible to recreate. It was recorded by Andrew and his recording engineer, Paddy Shaw, and, apparently, took nine takes to get one without background noise.

"We finally got the recording right by going there the Monday morning of a Bank Holiday, so everyone was sleeping-off the weekend. I sort of hit it lucky, otherwise it probably wouldn't have happened." Thus said Andrew on a BBC interview.

Whatever happened to my own tape recording I cannot say; it probably got lost or recorded over, though there are still boxes of cassettes in the loft that I have promised myself I'll revisit one day.


Incidentally, Norwich's Voice Project are now recruiting for a new community choir project based on bird flight. Following contributions by published poets of new poems on the subject of birds, the result of an appeal by the RSPB for a forthcoming book, several poets' work including that of Andrew Motion, George Szirtes, David Morley and Ruth Padel is to be put to music by commissioned composers. The final result, Ideas of Flight, will be performed at the Norfolk and Norwich Festival.